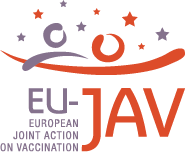 We are pleased to announce that the 2019 annual meeting of the European Joint Action on Vaccination took place from the 2nd to the 3rd of October 2019, at the Istituto Superiore di Sanita in Rome, Italy.

On 12 September 2019, in Brussels was held a Global Vaccination Summit, framed both by the European Commission and the Wolrd Health Organization. Jean Claude Juncker, President of the European Commission, and Tedris Adhanom Ghebreyesus, Director General of the World Health Organization, chaired the event. The objective was: “To give high level visibility and political […]

‘Paul has MEASLES’ Come discover this beautiful book suitable for children! To make them discover what measles is and how to fight it via vaccination through an illustrated story is to link playfulness and education from an early age! This book is available in several languages (French, English, Spanish, Romanian, Hindi, …) and easily downloadable […]

2019 Translational Research Day On April the 4th, the Centre de recherche Translationnelle organised the Journée de la recherche translationnelle at Pasteur Institute in Paris. This event brought together experts on Vaccination, HIV and HVB who could present and debate on these subjects linked with translational research.  The event was opened by James Di Santo, Director […]

This project has received co-funding from the European Union’s Health Programme under Grant Agreement no. 801495.

Register your email address to receive our newsletters